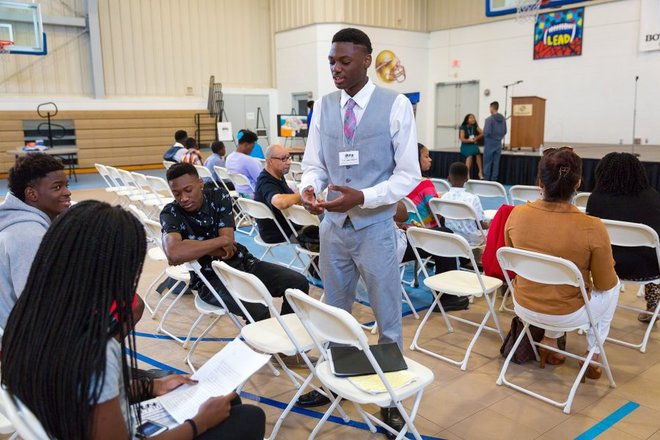 By Liz Freeman of the Naples Daily News

Jhonnan Desinor wanted to stand out when he was on the stage reciting a poem he wrote about unrequited love.

Wearing a yellow bow tie against a black shirt and pants, the 16-year-old’s words were both sweet and honest in their message to girls about how boys claim love but often don’t mean it: “Girl, do not let this boy play you.”

A sophomore at Golden Gate High School, Desinor was one of 14 local students competing Saturday in the NAACP’s Academic, Cultural, Technological, and Scientific Olympics (ACT-SO) program to showcase talents and compete for gold medals.

The winners will be announced Saturday, April 23, at the NAACP’s local ACT-SO ceremony luncheon at the Hilton Naples Hotel.

Desinor got the idea for his poem last November from a friend who was upset over a boy who treated her poorly. He’s been writing poetry for a while and wants to see how far he can go with it in life.

Jackson Pierre, 16, submitted a pastel drawing for the competition. The drawing, about the corruption of peace, depicted the Earth and pollution.

“It’s supposed to focus on pollution and the greenhouse effect and how we are killing the Earth with pollution,” the Golden Gate High School sophomore said. “I want to open my own organization. It’s going to be an art studio.”

Laurie Paul shared in her poem how she was awkward as a youngster in elementary school and moved often but today is confident in her own skin: “The only race is the human race.”

“It is something I wrote for myself,” Paul, 16, a junior at Golden Gate High School, said. “Then I saw how good it was and I wanted other people to hear it.”

She plans to become either a fictional writer or interior designer to tap into her creativity.

Golden Gate High School junior Stephanie Latortue, 16, has won three local NAACP medals and one national NAACP medal in 2014 for her ongoing “hydraulic hand” project, a prosthetic for amputees. This year she has added a voice recognition element to activate eight movements.

She does not personally know anyone who is a hand amputee, but she began the project in her freshman year and has been refining and improving it ever since.

“It’s evolved from a simple science project,” she said, adding that her goal is a prosthesis that is affordable and functional for amputees.

She hasn’t decided where she wants to go to college yet but plans to stay in Florida for her undergraduate degree and then go out of state for graduate school. She plans to major in chemistry.

“I want to go into the field of biomedical engineering,” she said.

William McCormick, a retired molecular biologist in Naples and coach with the ACT-SO program, looked on in admiration of the students and especially Latortue with her hydraulic hand.

“These kids are all self-motivated,” he said. “Some come from very difficult backgrounds. This program helps them get scholarships to go to college.”

Seven judges decided winners in each category Saturday, but they will be announced next week, said Akita Cannon, the ACT-S0 chairman with the NAACP.

For more information about the NAACP ACT-S0 awards ceremony April 23, or to RSVP, email actso@naacpcolliercounty.com. It is open to the public but there is limited seating.