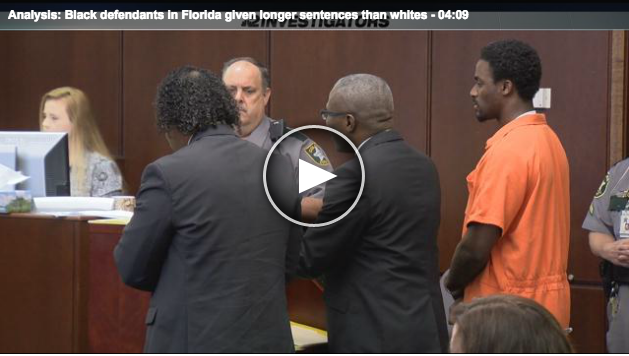 You are here: Home / News / Analysis: Black defendants in Florida given longer sentences than whites

LEE COUNTY –
When Kiereek Seymour recently entered a Collier County courtroom, several rows of his supporters stood up in support. A bailiff quickly told them to sit down, but their presence and purpose were felt.

“We’re here for him unconditionally, and we’re going down with him.”

Seymour is facing charges of DUI manslaughter, driving with a license revoked causing death, and several other traffic-related incidents.

At his most recent hearing, Collier County NAACP President Vincent Keeys was in attendance. He wasn’t there to plead Seymour’s innocence but rather to ensure he’s treated fairly in the court system.

“I honestly believe that there’s a big bias,” Keeys said.

“We have done our best to try and change the criminal justice system.”

A recent article by the Sarasota Herald-Tribune raised questions about implicit bias in judges.

“All of us have perhaps a level of implicit bias, and certainly the judges are not immune to that,” said Herald-Tribune Investigations Editor Emily Le Coz.

With her colleagues, Le Coz analyzed criminal convictions across Florida from 2004 through 2015, examining more than 82 million documents.

They found black defendants were often receiving longer sentences than whites for the same crime even if they have the same criminal history.

“You would expect that defendants with the same scores would generally receive about the same sentences, but that is absolutely not that we found,” Le Coz said.

Le Coz said their analysis of drug crimes found the greatest disparities in sentencing between whites and blacks.

“It looked like from the data whites were getting less harsh sentences,” Le Coz said.

According to the Herald-Tribune data, Lee County Judge Ramiro Manalich had some of the greatest disparities in Southwest Florida, sentencing black defendants to more than twice the time of white defendants for drug possession, robbery, and burglary.

However in his most common cases – 3rd-degree felonies – Manalich sentences whites to slightly longer prison sentences than blacks.

NBC2 wrote Manalich asking for an interview. Instead, we received a response from the court’s public information officer Sara Miles.

Miles wrote that Manalich could not do an interview because it could impede pending cases.

However, she also criticized the Herald-Tribune analysis, noting that they “made no attempt to distinguish between sentences imposed after a trial or open plea to the court versus sentences imposed pursuant to a plea agreement between the State Attorney and the defendant.”

NBC2 spoke with retired Collier County Judge Frank Baker to get his take on the issue of implicit bias. He said bias exists in some form in many people and he would often warn juries to be cognizant of the issue.

“We (judges) want to be fair and give the appearance of fairness but sometimes things play a role in what we do, and you may need to guard against that.”

However, he said he doesn’t believe implicit bias is rampant in Florida’s judicial system.

“I think most judges take pride in the fact that justice is blind.”

The Herald-Tribune article has sparked interest in a new group called Showing Up for Racial Justice, SWFL Chapter. Member Rachel Bass was at Seymour’s hearing.

Bass said she’s not there to point fingers but instead raise awareness of the issue.

“We don’t believe that any judge wants to be biased against people of different races,” Bass said.

“The first step is acknowledging a problem and facing it.”