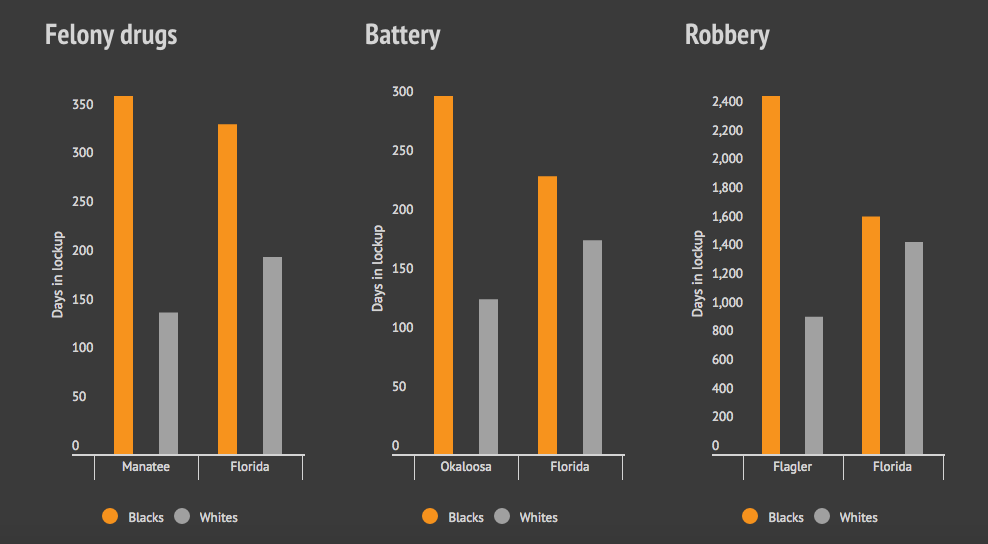 Justice has never been blind when it comes to race in Florida.

Blacks were first at the mercy of slave masters. Then came Jim Crow segregation and the Ku Klux Klan.

Half a century after the civil rights movement, trial judges throughout Florida sentence blacks to harsher punishment than whites, a Herald-Tribune investigation found.

They offer blacks fewer chances to avoid jail or scrub away felonies.

They give blacks more time behind bars — sometimes double the sentences of whites accused of the same crimes under identical circumstances.

Florida lawmakers have struggled for 30 years to create a more equitable system.

Points are now used to calculate sentences based on the severity of the crime, the defendant’s prior record and a host of other factors. The idea is to punish criminals in Pensacola the same as those in Key West — no matter their race, gender or wealth.

But the point system has not stopped discrimination.

In Manatee County, judges sentence whites convicted of felony drug possession to an average of five months behind bars.

They give blacks with identical charges and records more than a year.

Judges in the Florida Panhandle county of Okaloosa sentence whites to nearly five months for battery.

They lock up blacks for almost a year.

Along the state’s northeast shore, judges in Flagler County put blacks convicted of armed robbery away for nearly triple the time.