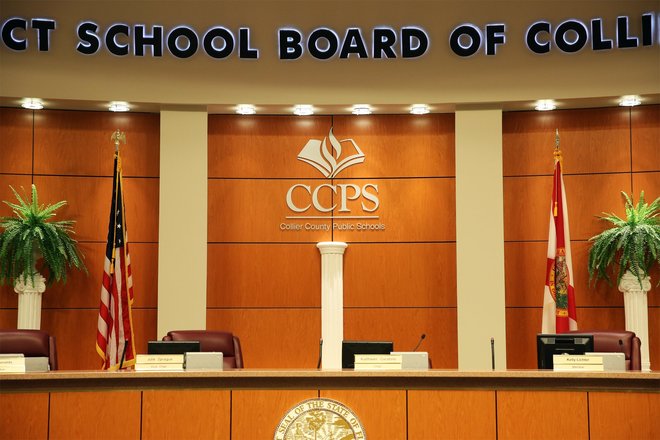 You are here: Home / News / NAACP calls for increase in diversity among Collier school district principals

By Melhor Leonor of the Naples Daily News

Of Collier County’s 48 principals of traditional public schools, one is black.

Calls for the Collier County School District to be proactive about creating a racially and ethnically diverse pool of principals intensified this month, when district officials filled three principal vacancies. They deemed two longtime black administrators who were finalists in the selection process — Palmetto Elementary Assistant Principal Sharon Wheeler and Shadowlawn Elementary Assistant Principal Oliver Phipps — not to be the best possible fit.

Vineyards Elementary Principal Mary Smith’s appointment as the district’s sole black principal preceded Superintendent Kamela Patton, whose five years at the helm of the school district and dozens of principal appointments have not placed any black administrators in a top school job.

While nearly 12 percent of Collier district students are black, 4 percent of teachers are. That’s 98 teachers out of 2,752 teachers who chose to report their race and ethnic background, the Florida Department of Education reports.

Those numbers are reflected in the proportion of black school leaders. Of about 100 assistant principals and similarly ranked administrators, eight are black.

District officials said that number has increased from five in 2011, when Patton took the helm of the district, and show an effort to strengthen the pipeline and create more applicants for the opportunity to interview for principal positions.

The Collier chapter of the National Association for the Advancement of Colored People met with Patton and her staff earlier this month to talk about what they see as an issue being ignored.

“It’s a great concern,” said Diane Haynes, of the NAACP chapter. “We definitely want our African-American kids to see that people in charge can look like them, not just the assistants — but the principal.”

Vianca Wheeler is also part of the group asking the district to make diverse leadership a priority. For her, the issue is personal; she is also the daughter of Palmetto Elementary assistant principal Wheeler.

“She got the (assistant principal) position, and that was when I was 16. I’m 25 going on 26, and it’s been so long,” Vianca Wheeler said. “This hasn’t broke her, but I know that she’s disheartened.”

She had strong words for Patton, who Wheeler said “doesn’t find it important whether the faces of the schools are diverse.”

Human Resources Director Ian Dean, who spoke on behalf of the district on the issue, said that during the meeting with the NAACP, the district made it clear the process was designed to yield the best possible candidate for the job — regardless of race.

He said to become a principal, interested candidates must submit application packets that demonstrate they possess the basic requirements for the job. After applications are reviewed, a group is selected to enter the “principal pool.” New principals for schools that need them are selected from those in the pool.

Once in the pool, Dean said, every candidate has the opportunity to interview in person and may be observed in his or her current job if possible. When three positions — at Estates, Poinciana and Palmetto elementary schools — became available this year, nine candidates in the pool opted to be interviewed — including Wheeler and Phipps, the only two pool candidates who are black.

Dean reiterated that the process is a fair and consistent one. As for the lack of black principals, Dean said it’s an issue that trickles down from the demographic of educators in lower positions and back to the applicant pool.

Assistant principals, district spokeswoman Leanne Zinser said, must complete 10 college-level leadership classes and pass a state exam. She added the district is working to strengthen its support system at this stage of the process.

But, Dean said, the biggest obstacle is found in the teaching applicant pool.

“We absolutely have a desire from a recruitment standpoint to continually seek out more diverse candidates. But in terms of our candidate pool, specifically, we are hiring consistent with the percentage of candidates we have from the different diverse background,” Dean said.

He said it’s especially difficult to attract young minority teachers because some are apprehensive of the demographics and lifestyle of Collier County.

Collier County is not the only district failing to match its educator cohort with its student population demographics. A 2015 report by the Albert Shanker Institute — which is backed by the American Federation of Teachers, one of the country’s largest teacher unions — showed that while minority students make up more than half of the total public school population in the U.S., only 17 percent of teachers are minorities. While that number is growing slowly, the share of black educators specifically, is declining.

Haynes, with the NAACP chapter, said this reality should further compel the district to be more proactive about attracting minority candidates.

She suggested a mentorship program, which existed in the district more than a decade ago for minority candidates but is no longer in place. The strategic plan approved earlier this year does not have quantitative goals to increase diversity.

“I think that maybe we in the African-American community can sit down with the superintendent again and for her not to just tell us what she does and leave it at that, but to tell us what we can do to help the process,” Haynes said.

Loretta Wallace, whose three children are graduates of the Collier County Public School system, said she plans to speak at the next school board meeting.

“With our children, we have to show them. Now you can see a little girl can become the representative of a major party,” she added, speaking of the presumptive Democratic presidential nominee Hillary Clinton. “Before, you could dream; now, it’s a possibility. It can happen.”