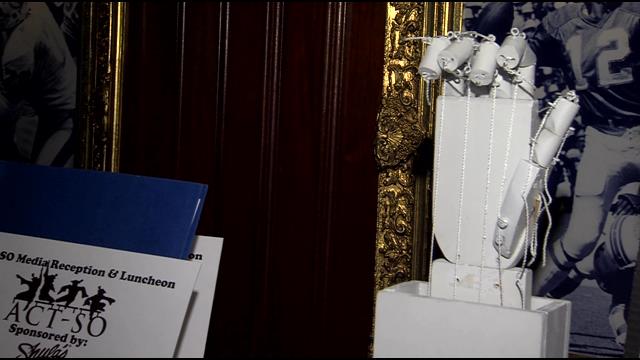 A Collier County student is taking a school project beyond the classroom.  Stephanie Latoitue won a bronze medal in a national NAACP STEM competition.

Latoitue built the first model of a prosthetic hand for amputees that functions through hydraulics.

“When you want something, I’ve heard from someone, that you have to want it more than sleep,” Latoitue said.

Latoitue spent several months designing the model during her freshman year at Golden Gate High School. She used several tools and materials, and the project won a bronze medal in the NAACP’s national STEM competition last month in Las Vegas.

“I got the idea that if I were to create a puppet approach robotic hand and use the robotic system, then it would be able to articulate just like a regular hand would,” Latoitue said.

“It’s very advanced for a freshman to come up with this concept,” Akita Cannon, Afro-Academic, Cultural, Technological and Scientific Olympics and chair of NAACP Collier County said.

Latoitue said the idea was fueled by her interest in science and her willingness to help people.

“I want to make prosthetic hands that are affordable so that a person can feel like they never had a hand missing,” Latoitue said.

The project is Collier County’s first win in the STEM category of the competition. Although Latoitue calls it a work in progress, she knows everything successful starts with an idea.

“My youth…we’re the future,” she said.

Latoitue is going into her sophomore year at Golden Gate High School. She is already working on a second – more advanced – model for next year’s competition. It could take a few years until her final model is complete.